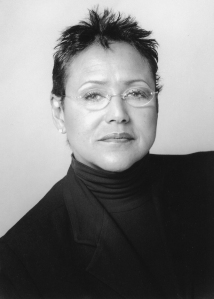 Since some are confusing the actually Black Panthers with some fools who keep popping up on FOX TV, it is a good time to look back and the career of Elaine Brown. Ms. Brown is the only woman to ascend to leadership of the Black Panthers. The Panthers were ahead of the time in many ways but equality for women was not one of them. The idea of the strong black women has partial roots the black power movement and who can forget Kwame Ture’s quote “The position of women in SNCC is prone.” I saw him speak a year before he died and he was still apologizing. Huey Newton’s views about women were abhorrent.

Elaine Brown grew up in the ghetto of North Philadelphia, with a single, working mother and an absent father. Despite desperate poverty, Brown’s mother worked to provide for Elaine’s private school education. As a young woman. After graduating from Philadelphia High School for Girls, she studied at Temple University for less than a semester. After withdrawing from Temple Brown moved to Los Angeles, California to try being a professional songwriter.

Upon arriving in California with little money and few contacts, Brown became involved with the Black Liberation Movement and she began working for the radical newspaper Harambee. Soon after, Brown became the first representative of the Black Student Alliance to the Black Congress in California. In April 1968, after the assassination of Martin Luther King Junior, she attended her first meeting of the Los Angeles chapter of the Black Panther Party. In 1968, Brown joined the Black Panther Party as a rank-and-file member, studying revolutionary literature, selling Black Panther Party newspapers, and cleaning guns, among other tasks. Brown soon helped the Party set up its first Free Breakfast for Children program in Los Angeles, as well as the Party’s initial Free Busing to Prisons Program and Free Legal Aid Program. Huey Newton a Panther with extremely misogynist views stated, “A woman in the Black Power movement was considered, at best, irrelevant. A woman asserting herself was a pariah. If a black woman assumed a role of leadership, she was said to be eroding black manhood, to be hindering the progress of the black race. She was an enemy of the black people…. I knew I had to muster something mighty to manage the Black Panther Party.”

During Brown’s leadership of the Black Panther Party, she focused on electoral politics and community service. In 1977, she managed Lionel Wilson’s victorious campaign to become Oakland’s first black mayor. Also, Brown developed the Panther’s Liberation School, which was recognized by the state of California as a model school.
Brown stepped down from Chairwoman of the Black Panther Party less than a year after Newton’s return from Cuba in 1977 when Newton condoned the beating of Regina Davis, the administrator of the Panther Liberation School. In her autobiography, A Taste of Power, she states this incident was the point at which Brown could no longer tolerate the sexism and patriarchy of the Black Panther Party.

Brown eventually returned to the civil rights struggle, focusing on the need for radical prison reform. From 1980 to 1983 she attended Southwestern University School of Law in Los Angeles. In 1996, Brown moved to Atlanta, Georgia and founded Fields of Flowers, Inc., a non-profit organization committed to providing educational opportunities for impoverished African-American children. In 1998, Brown co-founded the grassroots group Mothers Advocating Juvenile Justice to advocate for children being prosecuted as adults in the state of Georgia.

In 2003, Brown helped co-found the National Alliance for Radical Prison Reform, which helps thousands of prisoners find housing after they are released on parole, facilitates transportation for family visits to prisons, helps prisoners find employment, and raises money for prisoner phone calls and gifts. Brown has continued her prison reform advocacy by lecturing frequently at colleges and universities in the US. I got to hear her speak a few years ago and she was funny, informative and has risen above many of the rumors and antipathy that swirl around her tenure as a leader in the black panthers.

In March 2007, Brown announced her bid to be the 2008 Green Party presidential nominee. Brown felt that a campaign was necessary to promote the interests of those not represented by the major political parties, especially the interests of women under 30 and African-Americans. Her platform focused on the needs of working-class families, promoting living wages for all, free health care, more funding for public education, more affordable housing, removal of troops from Iraq, improving the environment, and promoting equality. Brown intended on using her campaign to bring many minorities to the Green party in hopes that it would better represent a revolutionary force for social justice. In late 2007, Brown resigned from the Green Party, as she found that the Party remained dominated by whites who had “no intention of using the ballot to actualize real social progress, and will aggressively repel attempts to do so.” Read more about Ms. Brown on her own website.

ABWW Heroine of the Day: Ida B. Wells

Wells states “I refused, saying that the forward car [closest to the locomotive] was a smoker, and as I was in the ladies’ car, I proposed to stay. . . [The conductor] tried to drag me out of the seat, but the moment he caught hold of my arm I fastened my teeth in the back of his hand. I had braced my feet against the seat in front and was holding to the back, and as he had already been badly bitten he didn’t try it again by himself. He went forward and got the baggage man and another man to help him and of course they succeeded in dragging me out.”Ida B. Wells also helped develop numerous African American women and reform organizations, but she remained diligent in her anti-lynching crusade, writing Southern Horrors: Lynch Law in All Its Phases. She also became a tireless worker for women’s suffrage, and happened to march in the famous 1913 march for universal suffrage in Washington, D.C. Not able to tolerate injustice of any kind, Ida B. Wells-Barnett, along with Jane Addams, successfully blocked the establishment of segregated schools in Chicago.

In 1884 she was asked by the conductor of the Chesapeake & Ohio Railroad Company to give up her seat on the train to a white man and ordered her into the smoking or “Jim Crow” car, which was already crowded with other passengers. Despite the 1875 Civil Rights Act banning discrimination on the basis of race, creed, or color, in theaters, hotels, transports, and other public accommodations, several railroad companies defied this congressional mandate and racially segregated its passengers.

Wells was forcefully removed from the train and the other passengers–all whites–applauded. When Wells returned to Memphis, she immediately hired an attorney to sue the railroad. She won her case in the local circuit courts, but the railroad company appealed to the Supreme Court of Tennessee, and it reversed the lower court’s ruling. This was the first of many struggles Wells engaged, and from that moment forward, she worked tirelessly and fearlessly to overturn injustices against women and people of color.