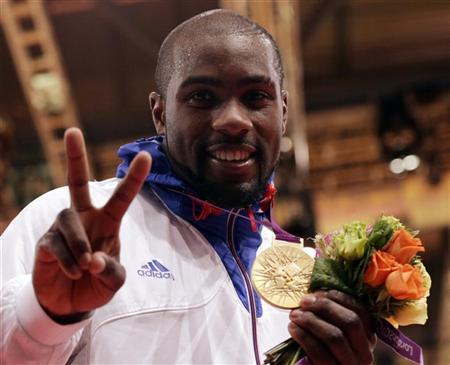 The roar from the crowd when France’s Teddy Riner was crowned Olympic heavyweight judo champion at the London Games on Friday was so loud he probably felt it could be heard in Paris.

A hero in his homeland, the 10,000-strong crowd at London’s ExCel Centre, awash with red, white and blue tricolour flags of France, chanted his name in the sort of reception usually reserved for pop stars.

Cuban men have a remarkable boxing tradition with  Teófilo Stevenson and Félix Savón  as two of only three boxers to win three Olympic gold medals in three consecutive games.  Cuban women also have lesser known olympic history in the martial art of Judo, but have not won a gold  since Driulis González in the 1996 Atlanta games. Recently, Cuban women have  been on the comeback trail, with three silver medals at the Beijing Olympics.

Idalys Ortiz,  was the youngest judo medalist, had to be satisfied with a bronze medal at the Beijing games. The judoka had a triumphant comeback, winning the women’s Olympic +78kg category title in the 2012 games. Ortiz, 22 is seeded at number six in international competition, beat Japan’s Mika Sugimoto after she was awarded the win by the referee and two judges as the fight finished scoreless after extra time.  After her win the exuberant Ortiz jumped for joy and exclaimed, “it’s a dream!  Now that I have achieved this, I feel very happy and I thank everyone who has contributed. My family … everyone who trusted me.”

Check out her golden performance