Since I have ancestry from Jamaica and Grenada, was born in England  and lived in Canada and America, I have a tendency to think of the black experience as global. The English are known for their obsessive record keeping and lately they have been using these resources to examine the scope of the empires involvement in the institution of chattel slavery. A database will be available this Wednesday that details how much British slave owners were paid to compensate them for their loss of property. Slaves did not get a farthing and were compelled into indentured slavery scheme that was one step up from slavery. The documents indicate that at least 1/5 one-fifth of wealthy Victorian Britons derived all or part of their fortunes from the slave economy.

Current descendants of slave compensation include Prime Minister, David Cameron, former minister Douglas Hogg, authors Graham Greene and George Orwell, poet Elizabeth Barrett Browning, and the new chairman of the Arts Council, Peter Bazalgette. Other prominent names which feature in the records include scions of one of the nation’s oldest banking families, the Barings, and the second Earl of Harewood, Henry Lascelles, an ancestor of the Queen’s cousin. Some families used the money to invest in the railways and other aspects of the industrial revolution; others bought or maintained their country houses, and some used the money for philanthropy. George Orwell’s great-grandfather, Charles Blair, received £4,442, equal to £3m today, for the 218 slaves he owned.

I for one cannot wait to see, how much my ancestors were worth. My mother”s maiden name is Dawkins. Her father’s family was owned by the family that produced world famous atheist and pompous ass, Richard Dawkins. In it’s hayday the Dawkins’ owned over 1,000 slaves. Dawkins’ MP ancestor James Dawkins voted against Wilberforce’s proposal to abolish the slave trade, helping to defeat it by just four votes. George Hay Dawkins Pennant was another defiant slavery supporter. In 1831, two years before the act abolishing slave ownership in the Empire, he signed a circular which insisted: “the speedy annihilation of slavery would be attended with the devastation of the West India Colonies … with inevitable distress and misery to the black population.'” What an arrogant sod!

“Cousin” Richard claims he doesn’t benefit from slavery since he only has “400 acre country estate which barely makes a profit.” I can’t wait for more arrogant excuses from those who still benefit from the ill gotten gains of slavery and indentured servitude. You may ask why do I call this man “cousin.” The Consolidated Slave Act 1792 rewarded slave owners and overseers who increased their slave stock. The easiest way to do this was to was to supply your own seed. Rape and concubinage was rampant in the Caribbean, the diary of Thomas Thistlewood’s sexual escapades detail the sexual brutality that black female slaves lived under. How does one amass such a large amount of slave without doing your duty for King and Country? The database will be available at the  Legacies of British Slave-ownership website on 27 February 2013. 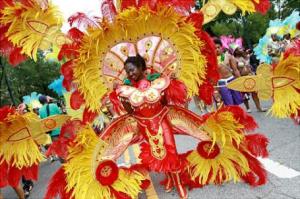 New York has the oldest and one of the largest populations of Caribbean Americans in the country. Every year West Indians from all over to world come to New York City on Labor Day to celebrate our rich history and culture. Things can get out of hand, but mostly it is just a gathering of hundreds of thousands of folks enjoying themselves. That many people in one place often stirs up white panic, even though St. Patrick’s Day parades can get just as or even more raucous. The police have been at the forefront of this anti-black phobia and attribute every crime committed by a black or Hispanic person to the parade. Last year they went too far and to many’s surprise they got punished for it. This year perhaps the Big Apple’s “Finest” can leave their bigotry at home and actually work to serve and protect the West Indian members of New York City.

Nearly 20 employees of the New York Police Department have faced discipline in connection with the posting of racist or derogatory comments on a Facebook page about revelers at the 2011 West Indian American Day Parade, a heavily policed annual celebration in Brooklyn on Labor Day weekend.The comments referred to “savages” and “animals,” and one poster wrote, “Let them kill each other.” The Facebook page, titled “No More West Indian Day Detail,” elicited comments from more than 150 people, many of whose names matched those of police officers.
The department’s chief spokesman, Paul J. Browne, said 17 people had since been disciplined; four of those are officers facing pending departmental trials on charges of “conduct prejudicial to the good order of the Police Department,” he said. Mr. Browne said that seven had received the department’s lowest level of punishment, the equivalent of a reprimand. Six others received what is known as a command discipline — a punishment that sometimes entails a loss of up to 10 vacation days.