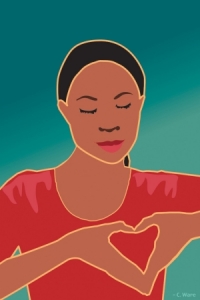 African Americans have higher blood levels of a protein associated with increased heart-disease risk than European Americans, despite higher “good” HDL cholesterol and lower “bad” triglyceride levels. This contradictory observation now may be explained, in part, by a genetic variant identified in the first large-scale, genome-wide association study of this protein involving 12,000 African American and Hispanic American women.Lead researcher Alexander Reiner, M.D., an epidemiologist at Fred Hutchinson Cancer Research Center, and colleagues describe their findings online ahead of the Sept. 7 print issue of the American Journal of Human Genetics

“Most previous studies examining the genetic determinants of elevated CRP have focused on tens of thousands of white individuals of European descent,” said Reiner, a member of the Hutchinson Center’s Public Health Sciences Division. “Since minorities – African Americans and Hispanic Americans in particular – tend to have higher CRP levels than other U.S. racial and ethnic groups, it’s important to understand whether genetic factors might contribute to these differences.” Reiner and colleagues identified several genetic factors linked to CRP that are relatively specific to African Americans. They found a variation in TREM2, a family of genes on chromosome 6p21 that are expressed in white blood cells and appear to be important for regulating the degree of inflammation generated when white blood cells respond to infection or tissue injury.