Writers of the Day 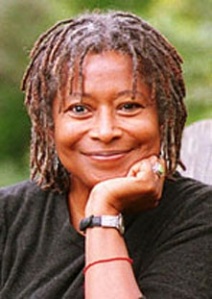 For more than four decades, Alice Walker has used the written word to make visible that which has been made invisible as a result of exploitation and marginalization. Equally as important, she is a humanitarian and social-change agent who has literally put her body on the line for peace and justice. Alice Walker walks her talk. Her living example has inspired and challenged countless individuals around the world to live fully engaged, compassionate lives.
My favorite Alice Walker books are Meridian and the Bluest Eye. How about you?
Malorie Blackman 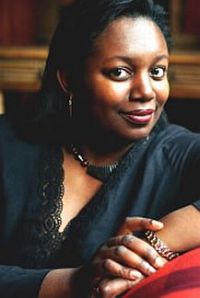 Malorie Blackman was born on 8 February 1962. While at school, she wanted to be an English teacher but grew up to become a systems programmer instead. She earned a HNC at Thames Polytechnic and is a graduate of the National Film and Television School.
Blackman married her Scottish husband Neil in the 1990s and their daughter Elizabeth was born in 1995.[3] Blackman has described herself, “I’m just Malorie Blackman – a black woman writer.” Her private school education was funded through a series of grants offered to her through her “exceptional writing” and her parents funded the rest of the fees through a series of low-paid jobs. This influenced Blackman’s first book, Not So Stupid, which was a collection of horror and science fiction stories for young adults, published in November 1990. Since then she has written more than fifty children’s books, including novels and short story collections, and also television scripts and a stage play. Her work has won more than fifteen awards. Blackman’s television scripts include episodes of the long-running, children’s drama Byker Grove, as well as television adaptations of her novels Whizziwig and Pig-Heart Boy. Her books have been translated into over fifteen languages including Spanish, Welsh, German, Japanese, Chinese and French.
Blackman’s award-winning Noughts & Crosses series, exploring love, racism, and violence, is set in a fictional dystopia. Explaining her choice of title, in a 2007 interview for the BBC’s Blast website, Blackman said noughts and crosses is “…one of those games that nobody ever plays after childhood, because nobody ever wins…”In an interview for The Times, Blackman said that before writing Noughts Crosses her protagonists’ ethnicites were never central to the plots of her books. She has also said, “I wanted to show black children just getting on with their lives, having adventures, and solving their dilemmas, like the characters in all the books I read as a child.” Blackman eventually decided to address racism directly. She reused some details from her own experience, including an occasion when she needed a plaster and found they were designed to be inconspicuous only on white people’s skin. The Times interviewer Amanda Craig speculated about why the Noughts Crosses series was not, for a long time, published in the United States: “though there was considerable interest, 9/11 killed off the possibility of publishing any book describing what might drive someone to become a terrorist. Noughts and Crosses is now available in the US published under the title Black White (Simon Schuster Publishers, 2005).
Noughts Crosses was #61 on the Big Read list, a 2003 BBC survey to find “The Nation’s Best-Loved Book”, with more votes than A Tale of Two Cities, several Terry Pratchett novels, and Lord of the Flies.
She was appointed Officer of the Order of the British Empire (OBE) in the 2008 Birthday Honours.
Courtesy Wikipedia