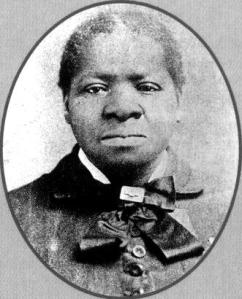 Bridget “Biddy” Mason, was a slave who moved to California with her owner in the 1850s. She eventually petitioned the court for her freedom — and that of her children— and was emancipated. She worked as a nurse and a midwife while simultaneously purchasing real estate and growing a fortune that she used for philanthropic endeavors, including founding an elementary school for black children and helping black women agitate for the vote.

In 1847, Brigham Young was starting a Mormon community in California. Robert Smith, a follower of Young and Biddy’s also moved his household and slaves (90 people in all), to Utah Territory. On this arduous 2,000-mile trek across the country, Biddy’s responsibility was to herd the cattle, prepare meals, act as a midwife, and take care of her own children. (She had three daughters, Ellen, Ann and Harriet, whose father was reputedly Smith.) In 1851, Smith moved everyone again to San Bernardino, California, where Brigham Young was starting another Mormon community.

Biddy learned through friends in the African-American Los Angeles community that California had been admitted to the Union in 1850 as a free state; slavery was prohibited. But such slave owners were rarely challenged, and if they were, they rarely lost the case. In the winter of 1855, Smith decided to move once again, to Texas, a slave state. Their departure was interrupted by the Los Angeles sheriff, who served Smith a writ of habeas corpus on behalf of Biddy.

Biddy’s daughter Ellen had been dating a free black man, Charles Owens, the son of an esteemed business owner in Los Angeles’ African-American community. Charles and his friend Manuel Pepper, who was dating the daughter of another of Smith’s slaves, helped Biddy file her petition with the court for her freedom. Since California law at the time prohibited blacks, mulattos and Native Americans from testifying in court, Biddy could not speak on her own behalf, but the judge did meet with her privately to hear her story. Robert Smith did not appear in court so, on January 19 (another source says January 21), 1856, the judge granted Biddy her freedom, as well as that of her three daughters (some sources say all the other slaves of Robert Smith were freed as well).

Biddy moved to Los Angeles, accepting the invitation to live with the Owens family. (Her daughter Ellen later married Charles.) She quickly became well regarded as a nurse and midwife, assisting in hundreds of births to mothers of all races and social classes. A couple sources say she was immediately offered a job after the trial by Dr. John S. Griffin, a Los Angeles doctor who had become interested in the case. What is certain is she soon became financially independent, saving her money and living frugally. Ten years later, in 1866, she bought a house and sizeable property on Spring Street for $250 — becoming one of the first black women to own land in Los Angeles. She instructed her children to never abandon it.

Mason was one of the first black women to own land in Los Angeles. This site is now in the center of the commercial district in the heart of Los Angeles. In 1884, she sold a parcel of the land for $1500 and built a commercial building with spaces for rental on the remaining land. She continued making wise decisions in her business and real estate transactions and her financial fortunes continued to increase until she accumulated a fortune of almost $300,000. Her grandson, Robert Curry Owens, a real estate developer and politician, was the richest African-American in Los Angeles at one time. Was the wealthiest African-American in Los Angeles at one time.

Biddy became known as Grandma Mason — generously donating money to charities (she would occasionally pay the expenses of both Black and white churchs), visiting prison inmates with gifts and aid, and giving food and shelter to the poor of all races. Needy people often lined up in front of 331 South Spring Street. One source says she also ran an orphanage in her house.

In 1872, Biddy and her son-in-law, Charles Owens, founded and financed the Los Angeles branch of the First African Methodist Episcopal Church, the first black church in Los Angeles. It is now known as 8th and Townes, and is presently housed in a modern building at 2270 South Harvard Street.

In 1851, Smith moved his household again, this time to San Bernardino, California, Smith probably did not know that California had been admitted to the Union in 1850 as a free state and that slavery was forbidden there. Mason petitioned the court and in 1856 won freedom for herself and for her daughters. She moved to Los Angeles and found employment as a nurse and midwife. Hard work and her nursing skills allowed her to become economically independent.

Biddy Mason also gave generously to various charities and provided food and shelter for the poor of all races. Lines of needy people were often forming at 331 South Spring Street. She also remembered the jail inmates whom she visited often. In 1872 she and her son-in-law, Charles Owens, founded and financed the Los Angeles branch of the First African Methodist Episcopal church, L.A.’s first black church.

Biddy Mason died January 15, 1891 and was buried in an unmarked grave at Evergreen cemetery in the Boyle Heights area of Los Angeles. Nearly a century later, on March 27, 1988 a tombstone was unveiled which marked her grave for the first time in a ceremony attended by Mayor Tom Bradley and about three thousand members of the First African Methodist Episcopal church.

Thursday, November 16, 1989 was declared a Biddy Mason Day and a memorial of her achievements was unveiled at the Broadway Spring Center located between Spring Street and Broadway at Third Street.

2 responses to “ABWW Heroine of the Day: Bridget Biddy Mason”