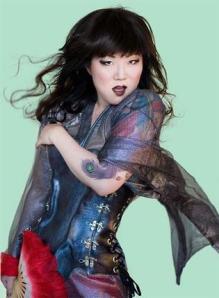 Asian women are fetishized in a very different way than black women. They are seen as subservient and the keeper of exotic sexual allure. I grew up in an integrated neighborhood with a small Chinese and Indian population. I never saw them as different, they were immigrants just like me. It was not until I got to the Midwest that I realized how narrow the views of many folks are. One of my Chinese friends in junior high was so talkative that our math teacher nicknamed her yenta. Margaret Cho is loud, slutty, funny as hell, not in the least subservient and quintessentially American, in my humble opinion.
Cho is best known for her stand-up routines, through which she critiques social and political problems, especially those pertaining to race, sexuality, and sex. She is the only Asian American to star in her own show, the disastrous All American Girl. Cho is hilarious when she describes how the bosses at ABC thought she was not Asian enough and then fired half the Asian cast .
She has also directed and appeared in music videos and has her own clothing line. She has frequently supported LGBT rights and has won awards for her humanitarian efforts on behalf of women, transvestites, Asians, and the LGBT community.
Check out some of her routines at youtube