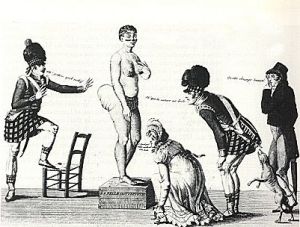 Saarjte Bartman was the most famous of at least two Khoikhoi (South African) women who were exhibited as freak show attractions in 19th century Europe under the name Hottentot Venus—”Hottentot” as the an offensive name for the Khoi people and “Venus” in sarcastic reference to the Roman goddess of love, to highlight a European concept of African women as hypersexual.
Sarah was orphaned in a commando raid, enslaved, then brought to Europe to be exhibited nude for the amusement of the paying audience, She was seen as proof of the debased and abnormal quality of black femininity . When she died her skeleton, preserved genitals and brain were placed on display in Paris’ Musée de l’Homme[8] until 1974, when they were removed from public view and stored out of sight; a molded casting was still shown for the following two years.
After the victory of the African National Congress in the South African general election, 1994, President Nelson Mandela formally requested that France return the remains. After much legal wrangling and debates in the French National Assembly, France acceded to the request on 6 March 2002. Her remains were repatriated to her homeland, the Gamtoos Valley, on 6 May 2002.

One response to “ABWW Heroine of the Day: Sarah (Saartjie) Baartman”