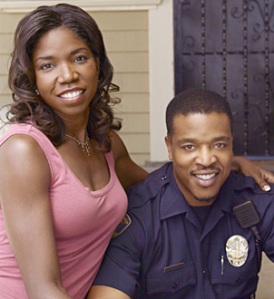 Jen Sutton is one of the few happily married black women in television history. Jenn played by actress Nicki Micheaux is a nurse married to a cop and despite her middle class upbringing lives with her husband in the hood. Ms. Micheaux comments that Jen is “a lot of women out there, juggling many balls, trying to do what’s best for her family and herself. The only unusual part is that she’s African-American. Typically black women aren’t so three-dimensional on the screen.” You can check out the series on TV-One, since it was recently cancelled by ABCFAMILY.

Micheaux was born in Detroit, Michigan to an army officer father.[1] She has been married for nine years and has two children. She has had many recurring appearances on various television shows including The Shield, Six Feet Under, and as Lila in Soul Food. Here’s hoping that she can find another three dimensional role on the boob tube.